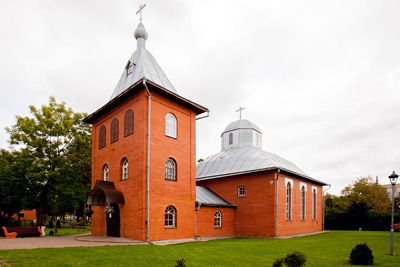 Church of the Kazan Icon of the Mother of God

Date of consecration: 29 July 1995 by Archbishop Cornelius of Tallinn and all Estonia

At the end of the XIXth century Sillamäe was a holiday village which was popular with Petersburg aristocracy and intellectuals. Petersburg summer holiday makers became the basic initiators of the construction of a new church in the village. With the blessing of Archbishop Arseny (Bryantsev) of Riga and Mitav was formed the building committee led by priest A. Belavin and money raising started. The main sum of 8 thousand rubles out of a collected 13 thousand was donated by honorable citizen N. Borodulin. In winter 1897 building materials were bought. The design was developed by a Petersburg civil engineer A. Montag.

In April 1898 the church construction was solemnly started and by July 12, the day of consecration, the church was finished. The church was consecrated in the name of the Kazan icon of the Mother of God by Bishop Agafangel (Probrazhensky) of Riga and Mitava assisted by six priests. The church was built from local flagstones and faced with bricks inside.

The icons for the iconostas were painted on zinc, with a gold background, by nuns of the Resurrection of Jesus Christ convent of Petersburg. The altar-piece of the Savior was made from multi-colored pieces of glass. There were tiled furnaces in the church, the floor was decorated with mosaic, and on the ceiling there were moulded sculptural ornaments.

From 1909 to 1916 in the Kazan church of Sillamäe, during summer months, services were celebrated by Saint Martyr John Kochurov, who actively took part in the life of the parish. Under his direction a parish house was built and the territory around the church was developed. A special women’s group for helping Russian soldiers was organized.

In 1941 the church was blown up and the parish was closed.