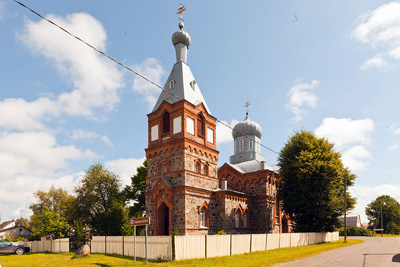 Yama parish was separated from Vasknarva parish by the decree of the Most Holy Synod of December 5, 1906. According to legend, the place where the village of Yama is situated, was blessed by Princess Olga. She was born in the suburbs of Pskov and later resided on the coast of Lake Peipsi at the source of the Narva River. On the right bank of the Narva River there is Skamya (Bench) village and according to legend, the village received its name after the inhabitants brought to Olga a wooden bench on which she rested. The upper part of the Narva rapids is called Olga’s Cross, the bottom part Whirlpool. Because of the strong current and an abrupt bending of the river a boat, together with Olga, turned over. Thank God, the Princess came up to the right bank and in honor of the rescue ordered a church to be built, which was one of the first Orthodox churches on the shore of Lake Peipsi. Downstream, on the Narva River, about three kilometers from the bank, there is Olga’s village, and near Yama village there is Olga’s Hill. She and her team continued down the Narva River to the place where it flows into the Gulf of Finland.

With the blessing of Archbishop Agafangel the church in Yama village was consecrated in the name of Saint Nicholas on August 13, 1904 by priest Alexander Tsvetkov. The church was built according to the plans of diocesan architect V. Lunski through donations. The last Russian Emperor Nicholas II donated to the church 600 rubles. During the World War II the village and the church were destroyed. For services the wooden graveyard chapel was reconstructed and consecrated in the name of Saint Nicholas.

The stone church in Yama was restored by Pyhtitsa Convent and consecrated in 1991 by Bishop Cornelius.