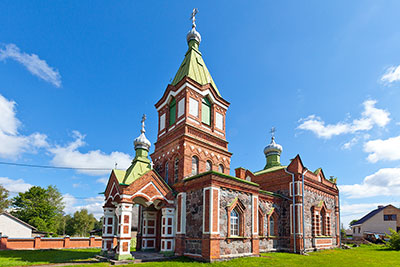 Church of the Epiphany

The parish of Lohusuu village (Russian name Logoza) was a part of Mustve Saint Nicholas parish. In the middle of the XIXth century a local resident, with the blessing of Archbishop Platon (Gorodetsky) of Riga and Mitav, began to build a church in the Orthodox cemetery. The design was developed by the local people. The church was based on a stone foundation, the walls and the roof were wooden. The church was consecrated in the name of the Nativity of John the Forerunner in 1863.

The independent parish in Lohusuu was opened by the decree of the Most Holy Synod of July 18, 1866. At the beginning of 1897 official permission was given for building a new church in Logoza. The church was built through donations from Petersburg merchant Joseph Medvedjev.

With the blessing of Archbishop Arseny (Bryantsev) of Riga and Mitav a new church foundation was laid on May 14, 1897. The church was built according to the design of a diocesan architect, V. Lunski.  The contractor Ivan Goppom agreed to build the church for 12400 rubles. The church was built from granite. Corners, corbels and the belltower were faced by red bricks. The church accommodated about 400 people.

With the blessing of Bishop Agafangel of Riga and Mitava the church was consecrated in honor of the Nativity of the Mother of God on November 29, 1898.