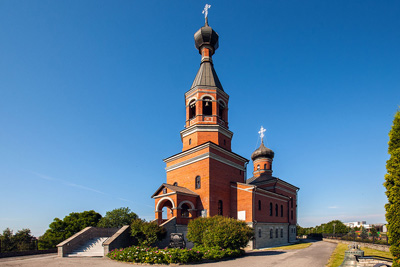 Date of consecration: 9 June 1998 by Metropolitan Cornelius of Tallinn and all Estonia
Lower side-altar: Consecrated in the name of St Seraphim of Sarov

The Orthodox believers of the city of Maardu, who did not have their own church, had to travel to Tallinn. For the elderly it was not easy and also expensive. Then appeared enthusiasts, who decided to build a church. The churchwarden Sergey Steklov managed to agree with local authorities on a beautiful plot on a hill for the church building. He found architect Vlasov under whose design, in 1992, the two-storey stone church of the Archangel Michael was founded.

The church was built on offerings — but it was not enough. S. Steklov asked for money from all the people who could help and very often people responded generosly. In 1994, Archbishop Cornelius of Tallinn and All Estonia consecrated the basement church in the name of Saint Seraphim of Sarov. Services began. At the same time the decoration of the main church was continued.

The icons were painted in the workshop of Tallinn artist Nikolay Merkuryev.

The main church was consecrated on July 9, 1998 by Archbishop Cornelius of Tallinn and All Estonia.