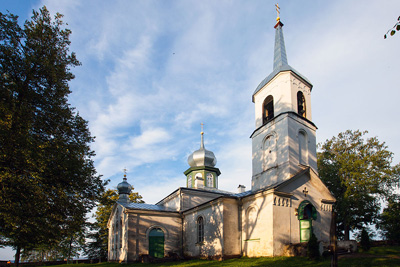 Church of the Protection of the Mother of God

The opening of an Orthodox parish in Nina village (Russian name Nos) was connected to the spreading of the Old Belivers (Old Orthodox Church) on the coast of Lake Peipsi in Mustvee and Kallaste regions. The Russian population on the coast of Lake Peipsi appeared at the end of XVII century. Basically it was made up of refugees from Russia, adherents of the Old Belief, seeking refuge from prosecution by the authorities of the Russian empire. By the decree of the Most Holy Synod of January 21, 1824 a new Orthodox parish was opened in Nina. Also there was given permission to build a new church. On the report of the public prosecutor of the Most Holy Synod Emperor Alexander I wrote the resolution: «Let it be so. Alexander». The stone church of the Protection of the Mother of God was started on April 8, 1824. The land for the church was given by Baroness Stackelberg, who also donated 1000 rubles and 20 thousand bricks. The design of the church was developed by Pskov architect Jabson, the contractor was Jefimy Rumbaltsev. The government donated the greater part of the money. The local voluntary helpers included local landowners. Lutherans also helped raise money for the building of the church. Almost 35 thousand rubles. The iconostas of XVIII century was given by Bishop Methodius (Pishnyachevsky) of Pskov, Livonia and Kurlandia. The church was consecrated on November 5, 1828.

The church stands on a cape jutting out into the lake. The cape looks like a nose which gave the name Nina (Nose) to the village. The church is seen from the distance and has always been a holy lighthouse for sailors. That is why the church was dedicated to the Protection of the Mother of God.