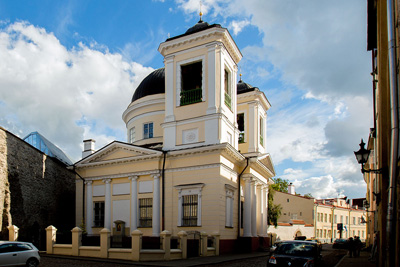 South side-altar: Consecrated on 3 December 1823 in the name of the Dormition of the Mother of God

“The Revel Church of St. Nicholas is the most ancient monument of Christianity and Orthodoxy in Revel. The foundation of the church goes back to XI century. Grand Duke of Kiev Jaroslav the Wise, son of Saint Prince Vladimir, was the founder of the church.” This is a passage taken from a small booklet «Orthodox church of Saint Nicholas in Revel» issued by the board of trustees of St. Nicholas Church in 1914. At the beginning the church was build on the hill of Brokus where there was a farmstead of Novgorod merchants who had appeared there long before the capture of northern Estonia by knights of Danish king Valdemar II in 1219. The first written mention of the church dates from 1371, but its appearance and description was not saved. Since 1420 Saint Nicholas church has been in Vene Street, which was an important historical street of the city in XIVth century and connected the Old market and the port.

At the beginning of XVIIth century the church and Russian trade chamber opened only on arrival in the city of Russian merchants. The rest of the time the keys were in the City Hall. Moscow Sovereigns made numerous generous contributions to Saint Nicholas church. One example of such contributions is the upper part of a big silver candlestick made in 1599 with a dedicatory inscription from Tsar Boris Godunov. In 1687 on behalf of the Russian tsarevitches (sons of Tsar) Peter and John their sister, Sofia Alekseyevna contributed a new iconostas for Saint Nicholas church in Revel. Icons for it were painted in Pskov.

At the beginning of the XIXth century the decision regarding the construction of a big five-cupola church — the design of well-known Swiss architect Luigi Ruska — was accepted. Because of a lack of funds the original site of the design was altered by provincial architect Schatten. The solemn ceremony of consecration of the main altar took place on August 14 (old style), 1827 on the eve of the Assumption of the Holy Virgin Theotokos.

The church is square and compact and is placed in a constrained plot between the street and the city wall. The main and lateral facades are decorated with porticoes, and the portico of the main facade is formed with four columns. The lateral porticoes are formed with pilasters. The big dome-shaped roof of the church reposes on the smooth walls of the high drum. Above the corners of the main facade there are two square belfries with pilasters. The building of the church dominates over the architectonic constructions of Vene Street. Saint Nicholas church is one of the most stunning examples of architectural classicism in the Old City and the first dome construction in Tallinn. In the internal space of the church an important feature are four pylons located on the corners of the dome foundation. They are connected among themselves with powerful hemisphere arches and with pendentives of the vault turning into the high dome drum with windows. In 1893, through a donation by merchant Basargin’s widow, the classical iconostas of the central part of the church was replaced with a carved gilded one, executed in Russian style.

According to legend, under the church there are relics of Saint Arseni (Matsievich), Metropolitan of Rostov, banished to Revel by Empress Ekaterina II for resistance to the alienation of church property to the state. Saint Arseni spent his last days in the casemate of one of the fortress towers and passed his eternal rest in the Lord on February 28 (March 13), 1772.

A wonderful Archpriest Valery Povedsky served until his death at this church.