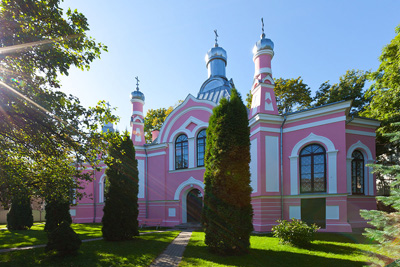 Church of St George the Conqueror

Date of consecration: 2 September 1870 by dean Pavel Alekseyev. After the restoration consecrated on 17 June 1945 by archpriest Georgy Alekseyev.

In Derpt (Yurjev, nowadays Tartu) in the XI century two churches were built: in the name of Saint George the Winner and in the name of Saint Nicholas; one church for the Novgorod merchants, another for Pskov residents. When Yurjev was occupied by order of Sword-bearers in 1224, Saint George church was heavily damaged and after ten years Grand Duke Svjatoslav Vsevoldodovich had to restore it according to the treaty concluded with the city authorities. The activity of the rector of the church, John Shestnik, was very important for Orthodoxy in Southern Estonia. He preached enthusiastically trying to convert the locals to Orthodoxy and due to this he had to leave the city and move to Pskov, where he took monastic vows and obtained the name of Jonah. Later he founded Pskov-Cave Monastery and became its first Igumen (abbot). His associate, a priest of Saint Nicholas church, Isidor, stayed in Yurjev together with his parishioners. His great zeal for the purity of Orthodoxy angered the knights of the Livon order. After a water sanctification ceremony on the feast of the Epiphany of the Lord in 1472 priest Isidor was seized together with the parishioners and drowned in an ice-hole, where the Orthodox inhabitants consecrate water on the feast of Theophany.

In XVIth century the Pskov-Caves Monastery played an important role for the population of Southern Estonia especially at the time of Saint Martyr Cornelius. He baptized into Orthodoxy residents of Chud, Vastseliina town, about 21km from Võru and, by his order there was built a church. Then he built two more churches in Estonia: the Holy Trinity Church in Agavere (Valga region) at Lake Aheru and the church of the Nativity of the Lord in Tabina (Vastseliina region). Igumen Cornelius provided the churches with clergy, church utensils and funds.

At the beginning of the 40s of the XIXth century many Estonian people began to convert from Lutheranism to Orthodoxy. The sharp increase of Orthodox parishioners raised the question about building a new church in Tartu.

In 1845 an Estonian Orthodox parish was opened. In 1868-1870 was built a brick five-domed church with a belltower which was consecrated by Tartu Archpriest Pavel Alekseyev. The church was built on a boggy place and soon the church began to sink.
For this reason in 1908 it was necessary to disassemble the belltower and to strengthen the foundation. During the World War II the church was heavily damaged from bombardments and shellings. Restoration work was completed in the summer of 1945 and the first Liturgy after the war was served on June 17 by Archpriests George Alekseyev and Rostislav Lozinsky, priests Miron Järvits, Martin Venesaar and Nikolai Koger.